Seeing Red: An Anatomy of an Irish Communist Childhood 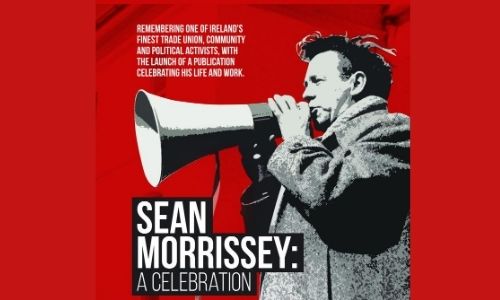 I have been awarded a Leverhulme Research Fellowship (2021-2022) to write a creative account of my Communist childhood in Belfast designed to interrogate the ‘vanished’ worlds of the Soviet Bloc and the Northern Ireland Troubles from a uniquely interconnected perspective.

My paternal grandfather, Sean Morrissey (1921-2016), was interned in Northern Ireland during World War II as a suspected member of the IRA. Whilst incarcerated, he ‘converted’ to Communism, becoming a leading activist in the Communist Party after his release, and was twice invited as an Honoured Guest (a Soviet designation) on speaking tours of the USSR.

Raised in the Communist ‘faith’, my father chaired the Connolly Youth Movement and also travelled extensively throughout Eastern Europe. In 1968, he met my mother, a Communist activist from Sheffield, at a Communist Party meeting in Belfast. They married, remaining in Northern Ireland as the Troubles ignited, and had two children. My childhood was subsequently characterised by radical political activity, Marxist-Leninist philosophy and unquestioning loyalty to the Soviet Union, overlaid by the additional complexities of growing up in a city beset by violent unrest. The micro-culture of my family was therefore peculiarly sited at the intersection of two era-defining conflicts: the Northern Irish Troubles and the Cold War.

Each essay will revolve around a single theme, incorporate both adult- and child perspectives, and move between pre- and post-Cold War/Troubles worlds.

This flexible compositional approach will bring the connections/disjunctions between past and present into focus, allowing for a contiguous exploration of the ‘vanished’ nature of the Cold War and the Troubles on the one hand, and of the ways in which characteristics of each conflict have persisted and/or been transfigured on the other.

The use of a textual form which positions itself between two dominant creative writing modes (prose and poetry) should enable the book as a whole to address its key concern—identity creation and disruption in a sharply bifurcated historico-political context—thematically and aesthetically.

The poster from an event remembering Sean Morrissey.

For the Arts: values and strategic priorities