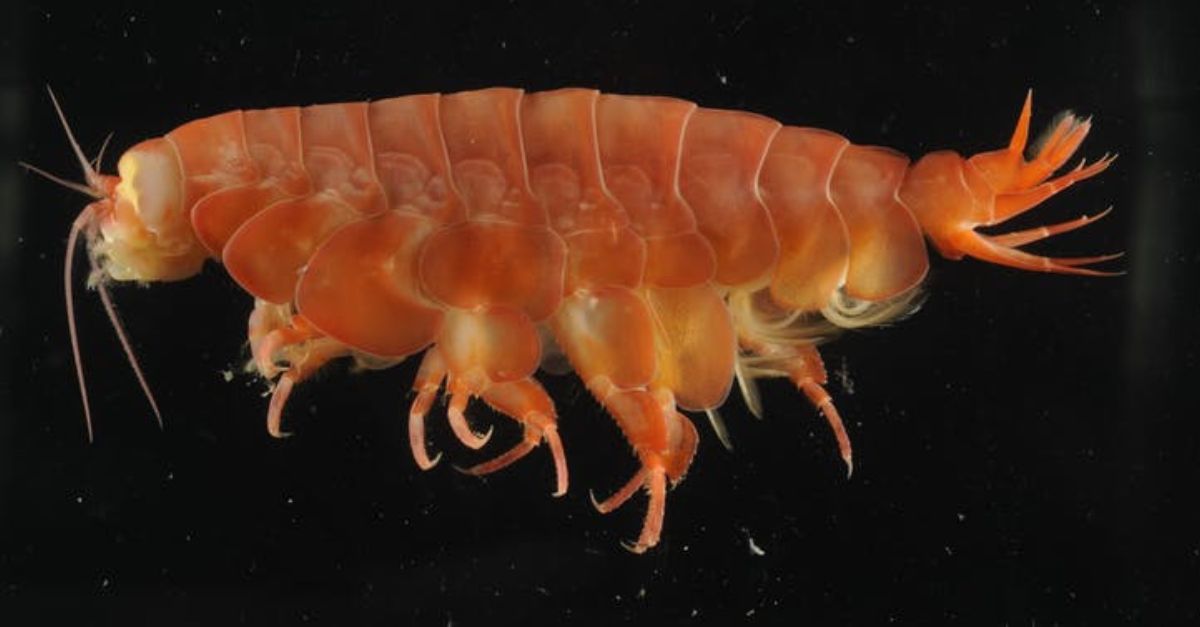 In our latest blog, Johanna Weston discusses the discovery of a giant new crustacean scavenging on the deepest depths of the ocean floor.  Read on to find out more.

I have been fortunate to name four species from some of the deepest, most remote and least sampled parts of the ocean. Each new species helps us uncover how life thrives in the hadal zone (anywhere deeper than 6,000 metres or 3.7 miles). Now, let me introduce you to Eurythenes atacamensis.

Eurythenes atacamensis is an amphipod, a type of crustacean closely related to a shrimp, endemic to the Peru-Chile Trench (also known as the Atacama Trench).

Measuring more than 8cm in length, it’s nearly twice the size of its nearest relative, making it a giant. Spanning an extensive vertical range, juveniles and adults can be found in the trench between 4,974 to 8,081 metres. This includes the deepest point, known as Richard’s Deep.

It is one of the most abundant members of the trench community, joining a trio of snailfish and long-legged, spider-like isopods. As a scavenger, this amphipod plays a critical role within the food web by intercepting and redistributing food sinking down from above. It quickly detects and consumes new carrion, like the mackerel bait we used to coax individuals into the trap. Unfortunately, it can accidentally ingest microplastics too.

Compared to the conditions at the surface, the hadal (or deep-sea) environment seems extreme.

It is pitch black with water temperatures varying between 1°C and 4°C at the deepest points. The hydrostatic pressure at hadal depths ranges from 600 to 1,100 atmospheres – equivalent to placing one tonne on the end of your finger.

But this environment is entirely normal to the organisms that live there. Hadal inhabitants have a suite of biochemical, morphological, and behavioural adaptions that allow them to thrive in the trenches. Studying these ecosystems is not an easy task – which is why the hadal zone has been understudied compared to shallower parts of the ocean.

Once the specimens were back on land, the detailed work to sort, measure, identify and describe new species commenced.

Eurythenes atacamensis is a member of a well-studied deep-sea genus (Eurythenes), which is notorious for what is known as cryptic speciation.

In other words, when it is hard to visually tell one species from another. The fantastic photographs of Eurythenes atacamensis were actually taken back in a 2009 expedition to the trench.

At the time, it was first identified as Eurythenes gryllus. With the new 2018 specimens, we accounted for cryptic speciation by applying an integrative taxonomy approach – pairing traditional morphology (the detailed study of an organism’s shape) with DNA barcoding. This latest research showed it was actually a different and undescribed species.

This taxonomic process helped us categorise organisms so we could more easily communicate the biological information.

Together, the detailed visual assessment and genetics gave us a clear result that Eurythenes atacamensis was a new species. Once confident in the data, we selected several individuals to be described and illustrated. These individuals are called type specimens – the most important of which is the holotype or the “name-bearing” specimen. We chose the name atacamensis in tribute to its home.

Another piece of the puzzle

This discovery is another piece in the puzzle of understanding the world that we live in and the subtle interactions between organisms and their environment.

It helps us understand how life thrives in the deepest parts of the ocean, under conditions that seem impossible to terrestrial mammals like us. It also gives us a glimpse into the hadal zone – not an extreme habitat bereft of life, but one filled with extraordinary biodiversity.

Johanna Weston is PhD Marine Science candidate, School of Natural and Environmental Sciences at Newcastle University. You can find out more about Johanna's work in this article published in The Conversation.