Health for Wealth: Levelling up the North-South health divide

Clare Bambra, Professor of Public Health in the Newcastle University Population Health Sciences Institute, has been leading our work on health inequalities, publishing several pieces of research that demonstrate the disproportionate impact Covid-19 has had on the North.

Here, she explains how ‘levelling up’ needs to work for both health and wealth.

Our society is afflicted by deep-rooted and persistent inequalities in health across regions in England. 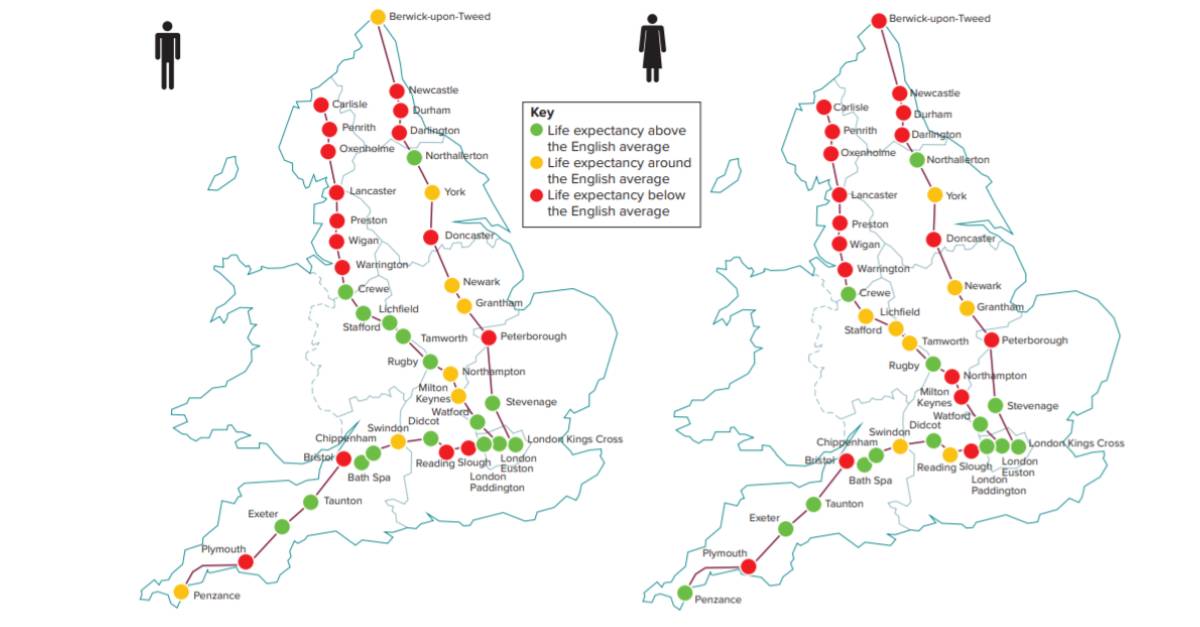 Left behind neighbourhoods, which have not prospered as much as other areas, experience even greater health inequalities, and the health of disadvantaged areas in the Northern regions has been falling further behind.

Put simply, people in the North are consistently found to be less healthy than those in the South - across all social groups and amongst both men and women.

Today, there is a two-year life expectancy gap between the three northern regions North East, North West and Yorkshire and Humber and the rest of England. Premature death rates are 20% higher for those living in the North across all age groups. Shockingly, over the last 50 years, this is equivalent to over 1.5 million Northerners dying earlier than if they had experienced the same lifetime health chances as those in the rest of England.

This stark picture has repercussions on the economic prosperity of the North, an area we have been studying with our colleagues in recent years. 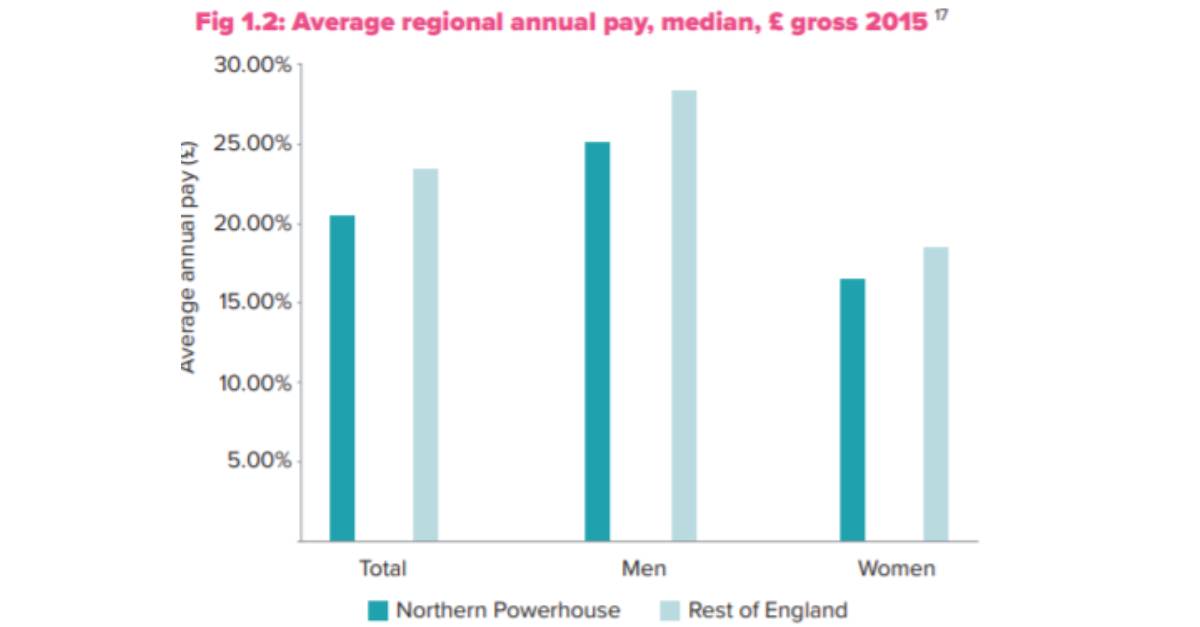 What is the productivity gap?

Our findings have reiterated the well-known productivity gap between the North and the Rest of England of a discrepancy in output per worker of £4 per person per hour, £28 compared to £32.

Poverty rates are also over 5 percentage points higher in the North than the rest of England; and the job density rate for the North is 0.78 compared to the national average of 0.83 and the London rate of 0.98. Job growth since 2004 has been less than 1% in the North compared to over 12% in London, the South East and the South West.

To be frank, when we look at these statistics, it is obvious that the North has not been benefiting from economic growth. 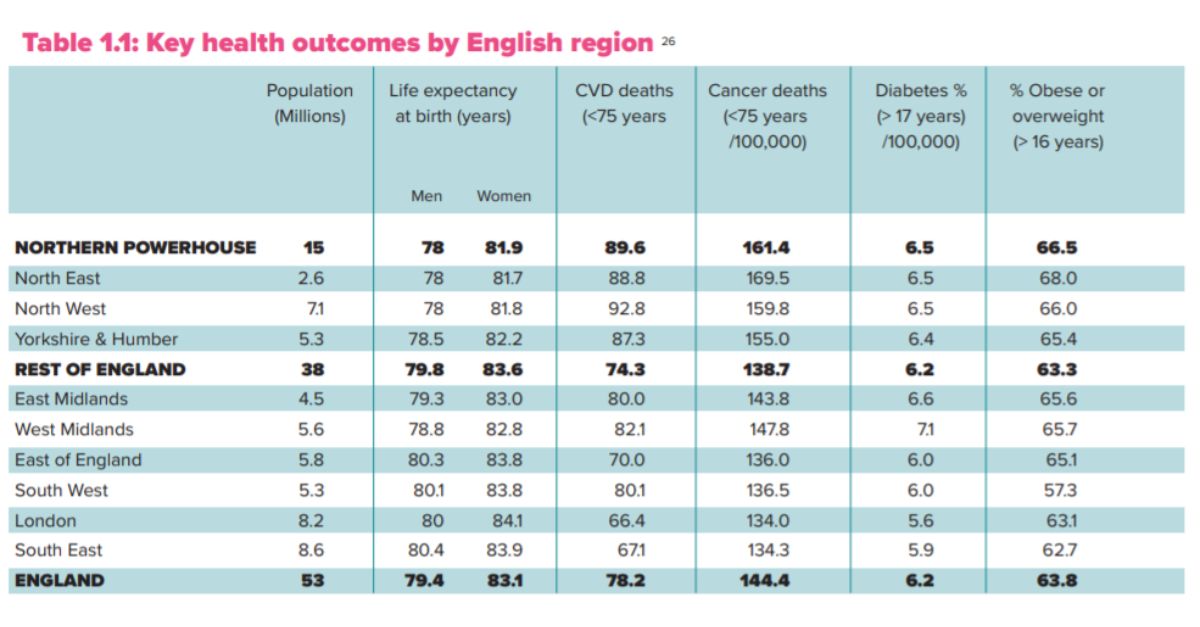 Given that our research has exposed how both health and productivity are lower in the North, and working in partnership with the Northern Health Sciences Alliance (NHSA) and colleagues in the Universities of Manchester, Lancaster, Liverpool, Sheffield and York, we led a 2018 report examining whether poorer health in the North had an impact on the poorer productivity: The Health for Wealth report.

We found that health is a key reason for lower productivity in the North:

Given the relationship we have established between health, health care and productivity in the North, we know that in order to meet the stated goals of politicians and policymakers to ‘level up’ economic inequalities - and improve UK productivity - we need to improve health in the North.

The devastating impact of the Covid-19 pandemic on the nation - and the world - is undeniable.

So in a follow-up report last year, we examined the impact of the pandemic on regional inequalities. Namely, inequalities regarding health and productivity.

The statistics speak for themselves in that we found:

How do we address these inequalities?

This is a key question that must be urgently addressed by the government.

Our work has shown the important opportunities for improving UK productivity by unlocking regional growth through health improvement, and that the pandemic has made this more pressing than ever.

Reducing health inequalities need to be at the heart of the government’s Levelling Up Strategy, and in our work for ‘Building Back Better,’ we make key recommendations to achieve this.

One priority is to increase NHS and local authority resources and service provision for mental health in the North – particularly targeting young people. They are a valuable resource for the future so investing in their resilience at this time will provide them with the skills needed to strengthen the future workforce.

Secondly, increasing investment in the NHS in the North will help the service catch up on health care needs not related to COVID-19. This can be achieved by increasing the existing NHS health inequalities weighting within the NHS funding formula.

And thirdly, by building resilience in the North’s population through developing a national health inequalities strategy with the aim of reducing inequalities in health and wealth.

These are not simple steps but the aim of the government should be to improve everyone’s health and wellbeing during and after the pandemic. We cannot let the North struggle further in the wake of Covid-19 and these bold steps are needed if we are to level up and ensure that the North is able to unlock the potential for the people who live there and deserve equal opportunities in both health and wealth.