Renewable Hydrogen: through concrete and clay, nature will find a way

Introduction to Micro-organisms and Hydrogen

Bacteria are single-celled living micro-organisms and many retain the features of the first organisms on Earth from over 3 billion years ago. Then, there was no oxygen, no complex sugars, only an atmosphere rich in carbon dioxide and hydrogen generated by volcanic activity. Micro-organisms therefore evolved the ability to use and produce these molecules.

Molecular hydrogen (H2) is a gas at ambient temperature and has the highest energy per weight of any fuel - burning in oxygen to produce only water as a product. In addition, its use in a fuel cell is a clean way to generate electricity. Hydrogen is also an important industrial chemical with >70 million tonnes used worldwide every year, in particular for making ammonia fertiliser. Unfortunately, most hydrogen used today in industry is made directly from steam treatment of fossil methane, with only 1% being generated by electrolysis of water.

The ability to utilise hydrogen as an energy source, and develop clean, renewable and sustainable supplies of the gas, is emerging once again as a potential growth industry, particularly as society moves away from the use of fossil fuel towards a low carbon, cyclic economy.

This has recently been recognised through an APPG report on hydrogen and its potential contribution to the economy. The critical feature of any economy based on hydrogen is that the fuel should be derived from sustainable sources and itself be non-polluting. Engineers can make critical contributions here, through innovation in electrolysis and carbon capture, but the biological sciences have a role to play too.

Approaches to biological hydrogen production ('biohydrogen') will be important as the environmental impact of carbon emissions gains long-overdue recognition in society.

Biohydrogen offers the prospect of fully renewable hydrogen, freed from any dependence on fossil fuel, and the scope for tapping in to this resource is enormous.

Currently, the amount of hydrogen produced by micro-organisms is small, but there is scope for imaginative bioengineering and ultimate scaling-up of the processes.

Bacteria, and some algae, which can produce hydrogen as they grow contain special enzymes called hydrogenases. The mechanism of these biological catalysts of great importance for chemists designing future hydrogen technologies that can mimic nature. Hydrogenases catalyse the interconversion of H2 and protons at rates higher than any known chemical catalysts like platinum, but by using the much more commonplace elements iron and nickel. To achieve these rates, the nickel and iron form a 'co-factor' buried deep in a protein shell to keep them stable in a special controlled environment. Although H2 is very small, it cannot diffuse freely through a protein. Instead, hydrogenases have gas channels that lead to-and-from the nickel/iron cofactor, as well as networks of amino acids that are thought to traffic protons in-and-out of the enzyme. Harnessing a hydrogenase by pulling it out of the cell and attaching it to an electrode will allow the enzyme to split any available H2 in to protons and electrons (electricity!). The reverse reaction (all enzymes are reversible) allows electricity to reduce protons to generate H2 gas.

The hydrogenase enzymes do not have to be removed from the cell to be useful in energy projects. Escherichia coli is a model bacterium currently used to make medicines and commodity chemicals. When E. coli grows in the absence of oxygen (actually its natural habitat in the animal gut is an anaerobic one) it will ferment sugars and produce hydrogen gas. It does this using a special hydrogenase that is fed electrons by another enzyme called formate dehydrogenase. Formate is a one-carbon compound that can be oxidised to carbon dioxide and releases electrons to ultimately generate hydrogen. This reaction is also reversible – in other words the E. coli hydrogenase can be used to convert gaseous carbon dioxide in to soluble formic acid. This is a carbon capture process that works very well, especially at slightly elevated gas pressures.

Living biological systems have all the chemistry needed to generate hydrogen as renewable energy source, or to use hydrogen to capture waste carbon dioxide before it reaches the atmosphere.

We are well placed here to contribute exciting discovery research that will underpin the emerging hydrogen economy. BBSRC have funded projects here at Newcastle to explore the relationship between biohydrogen production and carbon capture in bacteria, and to work with industry to ensure these new processes reach a global market.

Professor Frank Sargent is the Professor of Microbial Biotechnology in the School of Natural and Environmental Sciences at Newcastle University. His EPSRC and BBSRC funded research looks at the use of microorganisms as an agent for managing carbon dioxide gas levels and as generation tools for green hydrogen. Professor Sargent is also the Associate Dean (Research & Innovation), Faculty of Science, Agriculture & Engineering.

About our Centre for Energy

The Newcastle University Centre for Research Excellence in Energy unites our academics and researchers across disciplines and faculties to tackle the global need for a rapid transition to clean affordable energy. We are taking a leading research role in this area exploring the technical, economic, health and societal opportunities and threats energy brings. We explore the prospects for innovation, skills and industry as well as the potentials of enablement for green growth and deliverable solutions for Net Zero. The Centre is led by Dr Sara Walker, Reader in Energy at Newcastle University and Director of the EPSRC National Centre for Energy Systems Integration. 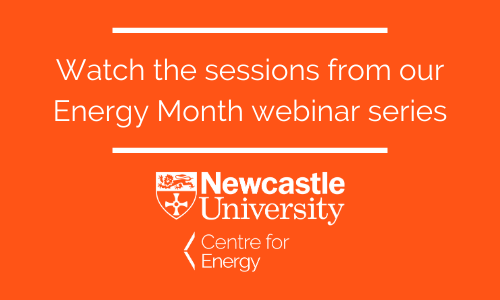 Photo by Kahika on Unsplash

Why we're creating new companies in the North East

Is seaweed the answer to more sustainable laundry?